A thousand and one...

....reasons why the drafts in my blogger account are still draft, why I keep meaning to pull open the computer and don't. Why I'm way behind on writing, reading, bathing....

But excuses about not blogging on your blog are boring. And unnecessary. And it really just boils down to this.

This is what I'm doing. This is how I'm feeling. This is all that's right in the world. We are at granny's house this weekend. Too hot for the beach, but not too hot to sit in the breezy shade outside. We may attempt a walk on the boardwalk once the sun sets a bit and shadows lengthen enough to offer some protection.

30 more days of leave. And I don't want to waste a drop of it. Oh June, please be the slowest month ever. 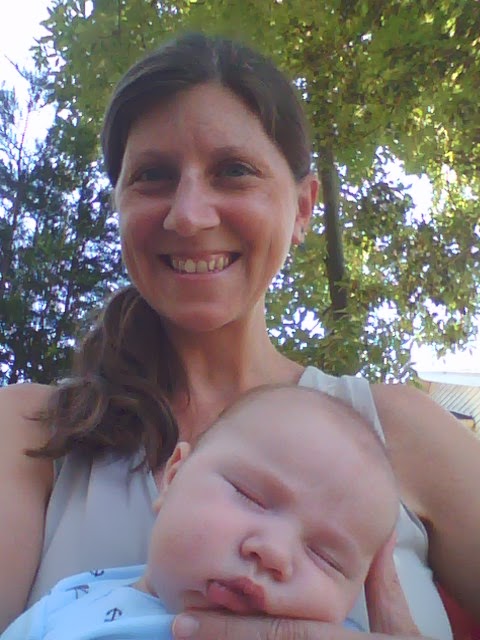 The Open-Hearted Way to Open Adoption: A Book Review

When I first started blogging, one of the things I looked forward to the most was the next round of the Barren Bitches Book Brigade. Hosted by Mel at Stirrup Queens, the book brigade would read books relevant to the adoption/loss/infertility community, pose questions to each other related to the text and our own experiences....basically, function as a virtual book club, minus the cookies and wine and dysfunction that sometimes come with real life book clubs, at least mine.

And here it is again. The 23rd tour of the Book Brigade. Welcome.

It may have even been through one of those discussions that I got to know Lori Holden, the author of
The Open-Hearted Way to Open Adoption: Helping Your Child Grow Up Whole the book featured here today.  Lori blogs at Lavender Luz, and is a dedicated advocate for open adoption and adoptee rights. She's also, quite simply, a cool ass lady that I've had the pleasure of getting to know and the honor to meet. And she has done the very hard work of turning a concept into a hard-covered reality.

The Open-Hearted Way to Open Adoption is an easy read. It doesn't mean its easy to read, especially if you are struggling right now with the very questions that Lori puts front and center. How does an open adoption work? How might an open adoption work for me? Where is my place here? Where do I fit? How do I know if I'm doing it right?

Because there aren't any magic answers, no secrets that Lori reveals.

But she does present a comprehensive guide. Peppered by her own experiences and those of the birth mother of her daughter, with lists of pros and cons (a lady after my own heart), with points to consider and pitfalls to avoid. I've already heard several friends on the internet exclaim, "wow. I wish this was around when I started my own journey...."

While I'm not on a journey toward open adoption, not at the moment anyway, this book hits home for me in a number of ways. As:
I tried to read Lori's book with all of those hats on. Some were easier to wear than others. Here are the questions I'll try to tackle:

Yes! In fact, it makes something abstract and perhaps a little daunting feel far more concrete for me. I had never made the connection between a relationship with in-laws and ones through adoption before.

This was just one of the many "ah ha!" moments that I had reading Open Hearted. Every one of Crystal's sections gave me a perspective I never realized before. And I also had never heard of the idea of an "as if" family (in closed adoption, attempting to match a child as closely as possible to his/her adopted family so that one could easily assume he/she had a biological connection) even though that clearly happened with me.


Issues around identity, origin, connectedness – I think about this shit nonstop, as I am sure many, many people who have built families through nontraditional means do. I believe there is a balance between recognizing and honoring origins and finding a space of love and acceptance in a family that is not genetically yours. These things can co-exist. I believe this. I HAVE to believe this.

Now that little D is here, M and I constantly think about how to best share his origins with him (see the following question). Of course, my own adoption experiences shade my thinking. Difficult emotions for me relate to things I have discovered on my own, assumptions I made (sometimes wrongly), how I reacted towards my parents (both adopted AND first) based on those discoveries and assumptions, and coming to terms with all of that now that I am a parent myself. Gah! I was a dick. But I wasn't the only one.

I honestly think my dad never (ever) explored his own complicated emotions around adoption. If he had, he never would have said things like, "my father had 7 kids; I never had any...." in front of me and my (also adopted) brother.  I don't really know where to go with that thought other than, my gosh, it is so vital to reach into the deepest parts of your mind, pull out those thoughts and work them through before a child enters the picture. I really like how Lori emphases the option of counseling throughout the process, especially for the adopting parents to help them work through grief that may be lingering after years of infertility and possibly loss. I feel this was a step that got skipped back in the day.

Since the question asks about a specific time, I'll point to the drive home after meeting my birth father for the first time. Wow. What a range of emotions. My first thoughts weren't about him, they were on these two new amazing women in my life - my birth aunt and birth grandmother. Two women who now are among D's biggest fans. I had to stay focused on the positive because I was so utterly disappointed in the person who was the biological connector. Because he was so like my dad dad (see "as if" adoptions), so unlike the origin myth I had created with the little info I had. So, so, meh.

Worse than meh, this was a stranger acting pretty territorial about me. Me! Dear readers, I ask you, how do you think that went down?

Even before the meeting, I knew there was truth in my birth mother (now a counselor)'s words. Words she used to explain to the agency why she chose NOT to reunite with me: "these meetings are never what either person wants them to be." But I still needed to try. After the twins died, I needed to find this biological connection. I needed to grow one piece of my family to ease the pain of the other piece I had lost.

So, what was the outcome of my exploration? I had to remember that I asked for the reunion. I sought him out. Not the other way around. And he is not to blame for not being the person my imagination wanted him to be. He had to realize I was not going to jump into his arms and be the daughter he always wanted. Expectations needed to be managed for both of us. These are realizations that might have been a little easier to come to if there hadn't been a 30+ year gap between having me and getting to know me.


In the beginning of the book, Holden talks about who this books is for. She states that it includes people pursuing donor eggs, embryos, and sperm. If you know there is no way for you or your child to ever contact the donor in the future, how would you apply the concepts of open adoption to a closed situation such as this?

This is a question I actually posed to Lori after her Huffington Post piece about donor sperm because I was wondering the same thing.

In our situation, we have an open and amazing relationship with our gestational surrogate. Connecting D with the woman who held him in her womb for us will be easy. Biological questions around the woman who anonymously gave her eggs to us to use won't be nearly as clear cut. I mean, we have the basics on paper, but sometimes, like the little girl says in the commercial, you want MORE; you want more, you just want it.

And we don't have more.

So, I'll share with you what Lori said to me: "It is more about parenting with an open heart than about having actual info and contact." She repeats this concept  - honoring both the biography and the biology of a child - in Open Hearted a lot. It's important. It's something I've been thinking about since the beginning of our journey:


I think about beginning a process. Recently, my brother asked if I was at least going to go in search of my medical records in case we would need then for the seedlings, forgetting that their origins are also a bit unknown. To be honest, I did too for a moment.

What can I do to ease this longing? Will the seedlings have these same feelings? If they do, I will need to remember that this particular kind of curiosity and longing does not go hand in hand with rejecting the life, or family, or love that you have. It really does coexist.

And I have to remember that in the end, Gonzo doesn't run into the spaceship, into the open arms of people who share his nose, his personality, his love of cannons, people just like him. He opts to stay right where he is.


My life is here. This is my home.

Please return to the main post to read more opinions on Lori Holden's The Open-Hearted Way to Open Adoption. There are tons of great bloggers answering some very thoughtful questions. I'm looking forward to carving some time out today to see what everyone else has to say, and adding a bit more to my own answers here.