"So, are you ready to play Sid and Nancy?"

"I am shooting you up tonight, right?"

Hottie Mommies and Such

This holiday weekend will officially be remembered as the weekend of deep and indulgent sleep.

After a pretty intense work week bookended by trips to the clinic for stripe checks (7.2 on Monday; 7.8 on Friday. Not bad, but not great. We can talk about that later), each and every morning was spent under the covers, dozing until well past 9 am. Because I could.

Most mornings, I would wake and contemplate all the things I could be doing with the early part of my day before coming to the conclusion that lounging in bed was exactly what I wanted to be doing. S0 that's what I did.

When I wasn't sleeping, I was repotting, cleaning, browsing the ArtsFest that graces our riverfront every Memorial Day weekend and generally enjoying a computer-free long weekend. Remember what that feels like? I didn't.

While at the ArtsFest, we made sure to check out one of our favorite local bands - a band which I've already decided should sing the soundtrack of that movie that should be made based on our lives. (I'm not the only person that does this, right? we all have soundtracks in mind, right?) So, I was already feeling a little melancholy halfway through their set - it's not like their songs address infertility at all. But they do, like most good country-rock balladiers, sing a lot about love, longing, wanting, journeys to better places, and the process (and the sometimes pain) of the trip.

The group also has what seems to be a disproportionate amount of hottie mommies amongst their fans. And they were all out. With their adorable young 'uns. Dancing. Frolicking. Loving the music and the day. One of our single friends (a hottie himself) was near the stage and he kept getting bombarded with kids running off the dance floor and into his arms where he would toss them around and nudge them back out onto the concrete to dance some more. Of course, once one kiddie saw the treatment, they all wanted some roughhousing and love. So he had his hands full for at least 3 songs.

This guy, hot as h*ll already, was even hotter in the context of his affection to the kids, who may have been offspring of other friends, a sister, a relative. Who knows. All I know is, I was thinking, d*mn, I don't think I remember ____ being that hot.

And then I started thinking about my own hottie sitting right next to me and wondering what it would be like to see hubby in that same context, only with kids that were ours.

And I was suddenly regretting forgetting my sunglasses at home. Because I really needed them.

I don't usually get caught up in the longing so this caught me a little off guard. I wondered if hubby was feeling the same. But I didn't ask. Because I didn't want to know. Because I think I do. 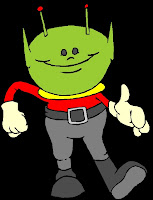 This morning hubby and I were lounging in bed, enjoying a lazy Saturday morning, taking bets on what exactly that little camera is going to find when it goes up in me on the 3rd.

While that's funny, I doubt any pesky E.T.s would have escaped previous ultrasounds and tests.

My money's on finding a huge set of sharp teeth where my endometrium should be, ready to devour any unsuspecting embryos we place in its path. A deeper variation on vagina dentata.

And see, here is where you really need the visual I provided. I'll let you think up your own.

There's still plenty of time to put your wagers in. Any takers?
Posted by m at 9:16 AM 4 comments:

Still here. Still chilling. Still waiting for that Maybe Baby. And doing those other daily things like, you know, living.

Stripe test and ultrasound are Monday. If all goes well, hysteroscopy and endometrial biopsy are June 3rd.