Can it be? One year blogging for me.

Is it really my one year blogoversary?

Since then, there have been 2 canceled cycles (lack of donor response), 1 BFN and a lot of anticipation. Our first FET (frozen embryo transfer) is well underway, complete with extra estrogen patches and acupuncture pokes.

Since I started acupuncture treatments this week, my dreams have amped up in vividness and frequency. Yes! Even more vivid than this one. More realistic than this one here.

So I've decided to take advantage of my overactive mind and try some visualization throughout the days leading up to transfer. Here's the visual I had of myself on the elliptical this morning, once again, trying to get in shape for the rigors I am hoping pregnancy will put my body through: 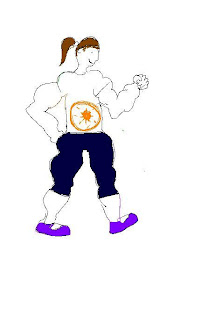 Ok. That's not nearly as cool as the image in my mind, but you get the idea, right? That's me with super-strong muscles and fortitude,protecting the sunshine and energy (an environment absolutely conducive to life, don't you think?) of my thickening womb.

Let me know if this is a bad idea.

A few weeks ago, I met up with a fellow blogger who I found out lived just around the corner from me. She blogs about eating disorders. During the course of the conversation, we started talking about all of the assvice we've both received from strangers, friends, family regarding our respective situations. You know. You've heard it: "just adopt....", "it's in god's hands...." "if its meant to be...."
Well, we found it all to be hilarious and decided to make some videos with our "favorites." Because you know you can never think of anything good to say until days later.

Well, now's your chance. come watch the vids and say what you wished you thought to say to your sister-in-law, your pregnant neighbor, your well-meaning but clueless friend.

Angelique is the lovely actor saying all those words that raise your blood pressure. I return the favor over at Breaking the Mirror.

We had a lot of fun with this project. I hope it helps you vent some steam too.
Posted by m at 9:02 PM 5 comments:

1) Link to the person who tagged you. (thanks, Stacyb for popping my MEME cherry!)
2) Post the rules.
3) Share six non-important things / habits / quirks about yourself.
4) Tag at least three people.
5) Make sure the people you tagged KNOW you tagged them by commenting what you did.

1.) I have always wanted to be in a sketch comedy troupe. In fact, I tried out for one in college and almost made the final cut. I still bear deep, deep grudges to those whom I believe voted for Eli* instead of me. (*Real name. H*ll yeah, I'm calling you out.)

2.) Every month, I anxiously await the arrival of my beloved Lucky, the Magazine about Shopping.

3.) I obsessively check my blogs, emails, MySpace, and Facebook throughout the day. As in, every chance I get.

4.) Like Daisy, when I was little, I used to pretend I was on a talk show. Only I was always the guest.

5.) I hate feet. My feet. Your feet. I almost started a riot when a few co-workers started wearing flip flops in the office last summer. Flip flops!! Get those toes out of here. Conversely, I love shoes.

6.) I have dreams of being a rock star, specifically, a bass guitarist. Never mind that I have never even held one, let alone played one. The subject of lessons and a purchase come up every now and again. Frankly, I think it's never too late to try, right?

I hereby tag wifethereof, drowned girl and Tracy.
Posted by m at 8:35 AM 5 comments:

Names omitted to protect the uninformed....

______, thanks for your email, but I'm not sure if you really read my blog. If you had, you'd know I'm not a tech savvy "mamma." In fact, there is a good chance I may never get the chance to be a "mamma." The blog is about infertility and trying to conceive using donor eggs. Your site looks fine, but please, I beg you, please be more careful when sending out requests like this - there are a lot of tech savvy women out there who are blogging about trying to become mothers and the assumptions made in your form email could really sting if someone who has just experienced a pregnancy loss or yet another negative pregnancy result.

I hope you don't mind me speaking for folks other than myself on this matter. If I had read this email immediately after my BFN, I may have tracked down this person and done something regretable. I am assuming other IFers would feel the same.
Posted by m at 12:03 PM 5 comments:

Email ThisBlogThis!Share to TwitterShare to FacebookShare to Pinterest
Labels: awareness

Not to going to rehab, but to an endometrial biopsy. Here's how it went down:

Nurse called last week, I thought to start scheduling our next cycle. She was actually calling to relay the advice of a new doctor who has apparently joined the practice. This doctor decided that what we really needed was to do a mock cycle and then an endometrial biopsy to see whether or not I needed to add any additional progesterone to our routine. That means, go through an entire cycle, including weeks of PIO injections, ending not in a transfer, but in this new doc taking a swab of my uterine lining. Based on the results of those weeks of hormones, headaches, shots and that swab we would either: a.) know that the protocol was just fine and start a new cycle or b.) add a little more progesterone to it.

I hung up with nurse, slightly stunned. Thinking first of all, "Who the F*ck is Dr. ____ and what does he/she know about me?" Second thought was, "Yes, my lining was slightly under 8 this time around but THEY CHOSE not to increase my estrace. It was less than 8 the first cancelled cycle and we upped the estrace, which seemed the do the trick. It was less than 8 the second cancelled cycle because I was only on estrace for a few days before the first stripe test...."

The more I thought about things, the angrier I got. I turned to hubby for some reason and rational thought. Perhaps I was overreacting or still upset from the BFN. His anger and indignity only added to mine. He broke it down like this: If an endometrial biopsy was what they wanted to do, they had 2 cancelled cycles which they could have continued to that end, AND the several months we were sitting around doing nothing while we were waiting for our donor to be available. Now, they want to waste our time, money, emotions? Now??

But none of this is the case.

So, confident that hubby had my back, I called nurse the next morning. And we talked about all of this. And much more. We talked about how bothered we were that of the 4 people present for our transfer, we knew none of them (nurse had CPR training and had already told us she couldn't be present). We talked about how upset we were that this new and unknown person (Dr. ___) seemed to be calling the shots on our cycles. We talked about how it felt when we felt the (well-respected and university-affiliated) clinic was more interested in keeping their stats above the national average than they were with us as patients. It was a long and hard conversation.

And it was so worth it.

She totally understood and sympathized and made it seem like she, too, was bothered by the message she had to relay. She explained that the clinic was expanding and that a number of doctors had joined the team, hence Dr. ___, hence the unknown faces between my legs at transfer. She explained who the new docs were and which aspects of the clinic they would be in charge of. We told her that we considered her our lifeline and the one real and human point of contact there. We didn't know what we would do without her. Long pause. She said, "then I am going to keep your file. I'm supposed to turn it over to another nurse now that you are doing FET but I won't and I am going to use this conversation as my justification."

So, it's day 5 of lupron. So far, so good. I need to get back in the habit of good breakfasts and healthy days. But we are looking forward to our first FET, scheduled tentatively for early March, with nurse by our side.

It's day 3 of lupron for this here FET cycle. And I'm feeling a little sleepy. More than a little lazy. Which doesn't bode well for my weekend plans. Not as monumentous as last weekend, but fun all the same.

Yes, that's a link to one of my other online projects that I mentioned a few months ago. It doesn't mean I won't be writing here. It just means that now I'm writing more. In fact, as soon as I open my eyelids a little wider, I'll tell you how and why I said thanks but no thanks to a "mock cycle" ending in an endometrial biopsy and opted instead to go full on into our first FET (with a little added pin action).

Same as It Ever Was?

Yes, I know. I'm sorry. I haven't had much to say. Since we received the BFN, my daily routine feels like it did a year ago, before the whole maybe baby adventure. No shots, no forgetting to take my pills, no hesitation before I eat something. No denial of caffeine or alcohol. One could almost be lulled into thinking it never happened. One could think that I am exactly the same today as I was February 3, 2007, 2006, 2005...

What's changed? Gosh, well, for at least a few days, my womb had the pleasure of hosting some little guys with potential. I know they were in there. I saw them as they were being placed. And having that responsibility, that honor, that joy, that feeling that I might be creating something, if only for a few days, is an experience I thought that I would never, never have. And I did. If things fell to sh*t right now and we decided to not try again, to leave this dream behind, I would have no hesitation saying that the exploration, the process was all worth it. I was pregnant, if only for a few days.

That's what I would say today.

Catch me at another time and I might rue the day that I ever started to question my childfree life. It wasn't/isn't so bad, is it?

No. It's not. And I bet I could keep living it and be ok.

But that's not something I want to explore just yet.

It's CD4. We are patiently awaiting cycle instructions from Nurse, who will call us after the docs have their weekly pow wow and decide what to do with us and our remaining embies.