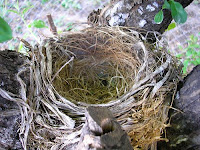 Yes friends, it is a BFN which, frankly, took hubby and I a bit by surprise this time. I've been cramping all week which I felt was a sure sign of something, right? Nope. It's nothing.

Angry. Sad. Angry. Resigned. Angry (at whom?). Confused. Relieved? (at what? Finally knowing?) A little Lost. Maybe a lot Lost. What am I going to do with myself today?

While I sift through these thoughts amidst more soul searching which I fear might be coming on, I need you, my friends, to do me a favor.

I need you to tell me the worst joke your know. I mean, the one that makes your friends groan and your husband furrow his brow whenever you try to tell it because it's so bad.


I love that joke. Instead of sympathies, please send me your crappiest, worst joke. God can't be the only one with a f*cked up sense of humor, right?
Posted by m at 9:09 AM 27 comments:

Two days ago marked 20 years cancer free for me, and I wrote about it a little bit here.

But what isn't apparent in that pretty upbeat post was the deep, deep sadness that consumed me for the entire day. It started creeping up on me as I was writing the post, then just kind of got worse and worse until hubby found me in my office a weepy mess. What the f%^& is wrong with me?? I asked that question, he didn't. I didn't think I had an answer. I just assumed it was a typical malaise that we all encounter every now and again. I was surprised by the words that came out.

20 years later and what do I have to show for it? What have I done with the life that was given to me? How have I helped anyone else besides myself? Who have I lived for beyond me? My life could have ended 20 years ago but it didn't. How have I shown my gratitude?

That was part of it. The other part of was based much more soundly in self-pity. 20 years later and I still have a drawer full of meds I can't afford. What's changed?? 20 years later and I am trying to undo what's been done to pieces of me that were never diseased in the first place.

But hang on a second. That's awfully presumptuous of me. What makes me think that hubby and I would have zero problems conceiving if cancer weren't in the picture? What makes me so sure that we wouldn't be in the same boat as so many of our real and blogging friends - testing, trying, testing again, trying to figure out why what should be so easy sometimes isn't? Cancer is an easy, easy (and deserving) scapegoat for us. But it has saved us from the months and months of diagnostic hells that so many of you go through - Do not pass Go, go directly to Egg Donor Program. We didn't have the unknowns, the unexplained, the maybe this, maybe that diagnoses that I know would have driven me crazy. So, I'm thinking for that I should be thankful.

Yesterday marked the one year anniversary of our first consultation with the RE. One year. That's a long time, but then again, it isn't. One year later and what do we have to show for it? Well, we now have our families and most of our friends fully invested in (and thankfully supportive of) our desire to have a family. It's no longer a secret, something whispered wistfully between us. I have this blog and this one which have turned into vehicles for empowerment, advocacy, and most importantly, have put me in touch with some kick *ss amazing, phenomenal women.

I have two little embryos that I hope are growing inside me as I type. Tune in Thursday for the first Beta.

The Greatest Art
Is to Sit and Wait
and Let it Come.
-Yogi Bhajan

Email ThisBlogThis!Share to TwitterShare to FacebookShare to Pinterest
Labels: anticipation

You guys should see the view from my window right now. It's gorgeous. The sun keeps peeking out of the clouds leftover from last night. The ground is still a little soggy after an evening of rain. Chilly, but warm enough that we've dared to crack open a few windows. It smells like spring. I know the sidewalks will be filled with walkers, joggers, strollers by midday. I wish I were one of them!

But I'll be taking it easy for another day. Transfer was Thursday and it went seamlessly. Besides my full bladder, I didn't even feel it (but I do have the ultrasound to prove that they're there). Four embryos thawed, two survived and cleaved nicely. They're chillin' up in my ute.

How to describe this time around? I'm feeling calm. Really calm. Bolstered by my lining "score" and this wonderful sense of support. Timing feels right. My in laws hung out with us Thursday night. My parents (in town for a funeral) paid a visit last night - both sets eager, excited, I could almost feel them willing it so.

I'm feeling thankful. And lucky. And sure, I'll say it, blessed. 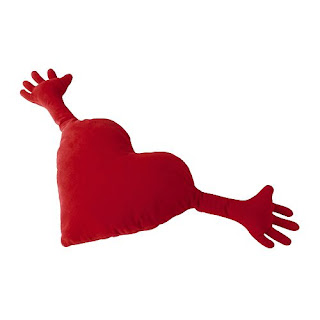 That's me tapping the mike to announce to the world that my lining measure a big ole 10.1 this morning.

My nurse chalks it up to the addition of estrogen patches. Sure. I'm also not so quietly thanking my new acupuncturist, a new attitude and a new commitment to visualizing success.

I laughed when I saw this cushion at Ikea this morning (an obligatory stop after a good visit to the clinic) because it is a pretty decent replica of another one of my favorite images that I've been conjuring lately.

It does look a bit reproductive, doesn't it? Is it just me? It's probably me.

I get a stitch on Monday. FET is scheduled for Thursday.

Barren Bitches and the Embryo Culture

It's time for another installment of the Barren Bitches Book Brigade brought to you by Mel at Stirrup Queens and Sperm Palace Jesters. I'm excited because this is the first one I've actually participated in. You can check out my responses here. And be sure to visit the rest of the lovely ladies. Links are here and here.

About halfway through writing these last night, I had second thoughts about posting them on a more public site. Perhaps these were better saved for here, or maybe even not discussed at all. Have you ever had a plan to approach something one way, but then midway through, something inside takes over and SPLAT! Before you know it you've spilled your guts all over the computer? That's what happened to me around 11 pm last night.

I don't think I've ever put into words my disappointment with god before. And there. I just did. I did regain some control during the writing process so it's not all out there. But enough to probably piss some people off.
Posted by m at 8:06 AM 2 comments: