"This is an awfully big house for two people...." 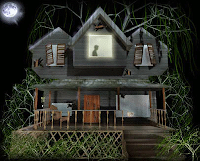 "Wow. This place is huge. Two people could get lost in this..."

He must have said it at least 10 ten times ten different ways. And yes, we did bring M's dad along for his advice and yes we did want his opinion, but after the third or fourth round of this refrain, I was done. I didn't want the house. I didn't want to be reminded we are ONLY TWO PEOPLE. I didn't want to go back home to our equally empty (and mind you, nearly as big) apartment. Just the two of us.

Let me back up. We are not in the market for a house. It was just one of those instances where you see something that looks like the steal of the century and your curiosity gets the best of you and you do some math and think, hmmm....and maybe you start dreaming of house parties with live bands. Maybe.

That's how M and I and our real estate-obsessed pal S and M's dad along for good measure found ourselves in a turn of the century 3000 square foot house yesterday. And yes it had original stained glass windows, and yes, it had funky things like secret stairwells and a wrap around porch. But it had something else that I can't quite put my finger on.

We were all wondering aloud what was making the owner sell, especially since she had just purchased it a little more than a year ago. Did the heating bill do her in? Was it just "too much house?" Did something happen here? "Oh no," our Realtor assured us. "They have to disclose if the house has been stigmatized."

"Stigmatized." Did you know that? I didn't know that. Do we have to disclose if the buyers are stigmatized?

Anyway, we're walking around and looking around and M's dad is punctuating about every 5th steps with the remarks above and I just say, "this place is creeping me out." S. nods. But quickly recovers and starts talking about painting trim and color schemes.

And then we find a note from the owner in the kitchen. It's her grandparent's house. They were the original owners. She talks about holiday dinners here as a kid, about how she bought it the first day it went back on the market (not really true, this house sat for almost a year at one point). But there was enough truth in the note to break my heart. I looked at M and could tell instantly he was done with the house too. Too many memories. Too many ghosts. Too much baggage. And goddess knows we have enough of all of that on our own.

So, there is a little relief that we are sticking with what we know, our little urban abode in a secure building that we can vacate at any time. A little sad. House parties could have been cool....A lot of other sad.

What if we weren't just two? What if there were four....

Ooo, a big creepy house. The minute you said your father-in-law and friend both got the creeps, I was thinking--HAUNTED!

I just have to say that this sounds like your gateway walk-through. We had one too. Oh, we weren't looking for a house, but then we walked through a trinity in the Village and bought a house two months later. I'm just sayin'.

When we bought our house we hadn't completely given up on the idea of a baby brother or sister for C. There was plenty of room for another person. Slowly but surely we've filled that extra space with stuff. Now I don't even know where we'd put a fourth (I guess it would actually be a fifth).

I think it's tough to operate without all of your pieces in place. It's hard to find the right fit.

With that said, if you change your mind, I would totally come to a house party with a band at your and M's haunted house. Assuming I'm cool enough to be invited even though I'm probably not.

@ang - ok this is where I confess this wasn't even the house we started to look at. Our gateway walk through was actually around the corner - a far smaller, but much tidier little arts and crafts style house. Driving home we saw this one for sale and were like, hey now, same price twice the house. Let's check it out.

I MUST have haunted on the brain because when I first read your gateway comment, I thought you were referring to our own personal portal into some netherworld. I think I need to go look at the place again...

@TracyOC (and Ang) you are on an eternal guest list.

Oh, and M wants me to tell you all he doesn't think the house is haunted. He think it will make a lovely home for some family - just not us. And he thinks even with four people its way too big.

It seriously reminds me of one of those houses from Dr. Zhivago that they divvied up for 4 or more soviet families.

But it is pretty cool looking. If you're into that.

We knew a couple through our pg loss support group who were going through infertility treatments. To help take their mind off things, they went looking at model homes in a new subdivision... and wound up with a 3500 square foot house. I can remember her telling us how all their relatives were making comments about "what a big house for two people!" It just made them want the house more ("so there!").

They did eventually sell it & downsize. (And it's still just the two of them.)

@loribeth, we seriously get that same static for the apartment we have now (it's just the 2 of you???) And part of me relishes it. And I do confess, some new information (our realtor calling and saying, "she is motivated. make an offer") is bringing the big creepy house back into my mind, but I don't think I'm gonna win this one... But I love your story and your friends' moxie. Good on them!

We are also dabbling in thoughts of buying a new house, but haven't started looking yet. My brain says the things your FIL says. So to shut down those horrible thoughts, I have decided to avoid all thoughts of new houses until I see two lines on a pee stick! Which might be never. Sigh.

@lucky - that IS the primary draw of a house, isn't it? Distraction. It is the first thing M said when we got in the car - well, at least we'd have things to do over the weekends instead of feel sorry for ourselves. I think he dreams of "honey-do" lists that occupy his time and give him insubstantial reasons to moan, as opposed to substantial ones.

Mind you, I am very aware that home ownership has the potential to give one very substantial reasons to moan as well. Our pal S who came along is grappling with the potential for mold, converting her pricey oil heat to natural gas and all of those other BIG home issues - which is why we brought her along too.

Finances also play a part here - is the minute we sign a mortgage the minute we find a carrier and need immediate cash in hand? Would the day our gutters crash the day we need significant moolah for a procedure or other ART-related expense. If timing is right, we *might* be able to swing both; but if its not, we would be totally and completely hosed.

I so get the whole "its just the two of you" thing. Our new neighbors came over to say hi and intro themselves. The wife just kept looking at me and past me in disbelief "really? just you two in this big house" while she perched her 8 month old on her hip and explained that they moved in next door cause they needed the extra space....implying I guess that we obviously don't.

We bought our house 3 years ago this month (I still can't believe it's been that long). 2700sq, .5 acres, 3/2.5 with an office aka the 'nursery conversion' room, according to most of our guests. A lot of house and land for two, but we fill it up...and it provides enough space for the two of us if we need some alone time.

I would've been content staying in our apartment, but T wanted a house, maybe even needed it. I got the impression that it gave him some hope for what our future might hold. Kept us moving forward, I think.

ps the house sounds incredibly awesome, tho. lots of history also sounds like lots to live up to, tho. ah, the presh-ah! ;)

I love old houses with stories. But I hate cleaning, and bigger houses = more cleaning. (it's not that I don't clean, there are just so many other things I'd rather be doing)

Still, I think the awkward timing of a brand spanking new mortgage and a perfect carrier who needs money to be a GREAT problem to have. Seriously. Go and tempt fate. Do it.