...What do you think they're doing in the next room?

Or at least all over the internets.

Yes, friends, its the end of another year so its time for the annual round up. What went down, what sucked (dad is gone) what didn't (BBB is nearly here) and all things in between, all in a handy month by month guide:

January - I was a quite the social butterfly, adding a FB and twitter feed to the blog, participating in a robust book club discussion (and then some), and taking part in Dresden's fantastic "In times like these" series.

February marked five years in the blogosphere for me, got us just a little closer to sealing the surrogacy deal (but not without some stops and starts) and saw me playing a pretty personal card in the discussion around choice.

March introduced us to our gestational carrier live and direct. Her hubby too. And we knew, pretty immediately, that this was, more importantly, they were the right choice.

April - foreshadowing dreams, cleaning house and getting fit, oh yeah and my birthday.

May was a tough one. It feels like this whole month was spent working on our surrogacy contract. Everyone was right. Hardest part of the journey. To date.

June - I wrote, but not so much here, I kvetched about dad and his kvetching, and we really and truly signed and sealed the surrogacy deal.

July - the Test is positive. The Streak begins. (drops mic).

August - wow. The end of this month sucked so hard I almost forgot to include it in the round up. Luckily, a fantastic few days with Paz in an unlikely setting helped round it out.

October - Sandy storms on through. The Streak continues. Big baby keeps on a-growing.

November - shit gets real. As in ultrasounds and belly pics and a trip to see big baby BOY halfway across the country (also to test out the road trip in store for us in March). And I got rid of those f*cking boxes. 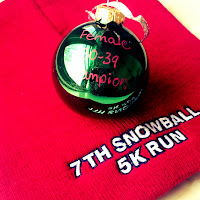 December - this month, we've been without our daughters for four years. Four. Jesus. This month, our BBB reached viability, and keeps growing and growing....And before you know it, we'll have some shopping to do. Or at least borrowing.

Added bonus: my first athletic achievement. Ever. (no hyperbole) I won my age bracket in a 5K while on a pre-Xmas trip to see mom. And didn't even realize it until later that night. Thankfully, they didn't give what is now one of my favorite ornaments on the tree away.

By the time you read this, BBB will be 27 weeks and 1 day along (and we still haven't told most friends and acquaintances). The Streak will be 169 days strong, even with a Christmas gift of the stomach flu. And I will be getting ready to kick everyone's ass in the most epic Rock-N-Bowl throw down ever tonight. Look out.

Congrats on your 5K and on your amazing streak!

Know what would be totally awesome in 2013? If you combined the two and streaked your next 5K.

So excited for your year ahead...

Wow! That year seriously kicked ass, bit ass and other things in between this very bad analogy!

But I'm so glad that you were able to get so much done and 2013 is on its way with so much good to come! Yay, you!

Lori, in case you're equally inspired to do so: http://www.nuderuns.com/CalendarMain.html :-)

an amazing year ahead for you, my friend! so very excited to watch it from the sidelines (just as I cheer your streak from here too). xo

Holy sh!t, you won your age bracket in a 5K? That is so awesome! I'm super impressed. You are seriously an inspiration.

You are awesome! Congrats on reaching the end of 2012 and achieving these amazing goals (your 5K achievement and baby boy achieving viability!). Good luck with 2013 - looking forward to following your journey!