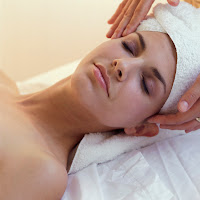 For the second time this week I find myself lying nearly naked on a table in a state of semi-consciousness. Only this time, the room is warm not chilly. Inviting not intimidating. Soothing instead of shock-inducing. It smells much better too.

After yesterday’s events I decided to join my co-worker and close friend and take advantage of the spa facilities that happen to be part of the hotel where we are having our three-day business meeting. She’s off to get a manicure and some reflexology. I am waking up from my 55-minute full body aromatherapy massage.

Sigh. It was awesome.

As the young technician’s hands are rubbing out my stress and anxiety I can’t help but wonder, what makes people choose a profession that brings them in such close and intimate contact with strangers? How can she bring herself to touch and manipulate strange bodies day after day? Old, young, sinewy, doughy, hairy even – all needing and wanting to be touched and in a sense, healed? How does she do it without gagging?

There’s a joke (that’s not really funny) between hubby and I about how my parents place doctors in such high regard and the fact that I went to a very good university and didn’t emerge as one is a source of eternal puzzlement and disappointment to them. But the truth is, I don’t do well with other people’s bodies. I am not sympathetic by nature and (until yesterday) I always considered myself to have a high tolerance for pain. Hubby tells me my bedside manner is pretty awful. I am sure he is right. A career in medicine, nursing or healing of any kind was never in the cards for me.

But this young woman must have some sort of gift. Something that I definitely do not have. Everything about her presence is comforting and her hands were strong! I was surprised by her firmness, even in her handshake. During the entire massage I kept thinking of scenarios or reasons why massage therapy became her chosen career. Obviously, I am making some huge assumptions here that it even is – it could be a summer job or something to get her through the rest of school for all I know. But I don’t think so.

In Alice Walker’s The Temple of My Familiar, one of the characters finds herself so sad, so jaded, so hateful to the whole of humankind, she quits her job and begins a new path as a massage therapist – forcing herself to touch and make contact with other human beings to remind herself that they, too, hurt and need healed, just as she does. I lay, face down, on this table and wonder if this sweet thing pushing on my heels and kneading my calves is jaded? Or someone who is seeking to reconnect with others? Or someone naturally drawn to a healing profession? Or just someone who doesn’t dig a 9-5 office environment kind of gig and would rather spend her days among scented oils and people who are truly appreciative of her attention?