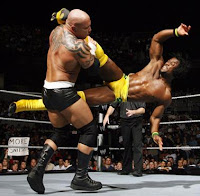 Clearly, we watch way too much wrestling. Waaaay too much.

Why else would my husband think it was perfectly rational to try to do a swinging leg pirouette in the kitchen - while I still had hold of his other leg?

Let me rephrase that. Why would M. be utterly shocked and surprised when he fell on his face after willingly removing both legs from the ground and spinning around?

"Why are you laughing?!?" he angrily asked. "What about this is funny??"

He disagreed. And further posited that it was my fault, because he had it all worked out, had I not pulled his leg and brought him off balance. Whatever, marmalade.

But its morning, and we've kissed and made up. The brush burn on his chin is barely visible and I think we've both learned a valuable lesson:

Sometimes, we can be total f*ck ups. I mean, WWE moves in the kitchen? Who does that? Do I dare tell you how old we are?

But we are also ridiculously in love. Still. Even after...holy shit....almost TWELVE years together, he's still my main man. I'm his lady. We're quite a pair. And I've said this again and again, but I truly don't know what I would do without him. With everything that has transpired and not transpired, I cannot imagine getting through this without him by my side.

Even when he's sulking and holding ice to his chin.
Posted by m at 7:24 AM

Tell M I think its funny too. Thanks for making me laugh on a day with few smiles.

You guys are so cool.

What a happy story! It's great that you guys still feel like kids sometimes.

Ha ha ha ha that is very funny!!! I'm going to try it on my man tonight.

that is AWESOME. you give us all hope. Thanks for the chuckle at work, and the warm fuzzy that 12 years on, and through the worse imaginable, there still can be joy and laughter and love.

You guys are adorable..

Haha that is too funny :) I bet it was quite a sight.

To be able to say you are still ridiculously in love is just so very awesome!! I hope my husband and I can say that at 12 years.