Day 7 - a photo that makes you happy

This is me. Circa 2000. After a day-long ascent up the Inca Trail en route to Macchu Picchu. At that point in my life, the hardest thing (mentally and physically) I had ever done. Because it was all me. It wasn't about dealing with something someone else did to you (chemo, a bad break up, etc.) It was a situation I put myself in and the only way I was getting out was by my own legs.

There were moments where I seriously was not quite sure I would make it to the top. Even gnawing furiously on coca leaves, the altitude was draining. I couldn't breathe. I couldn't feel my feet. And I couldn't understand why everyone else was doing ok and I wasn't and that was beyond discouraging (later M. reminded me that one cannot have a chestful of scar tissue and bleomycin and assume their lungs are fully functional. That helped the sting a little, but not enough) I found it harder and harder to resist the urge to fling myself over the side of the cliff. I remember thinking through an existence in Peru and how I could sustain myself if I had to linger there.

Even with the crest of the mountain in sight, I could not put one foot in front of the other for more than a few steps. I was immobilized. I just can't explain it.

And then M. who had been hanging out at our destination for at least an hour. Who had already done this gruel of a hike and was (rightfully so) resting his own sore legs and waiting patiently for me, realized that his shouts of encouragement just weren't working. And neither were his prods.

So he ran back down the trail, dried my tears, held my hand, took my pack and walked the rest of the way with me.

And then it was over. And then I realized I had done it. We had done it. And OMG the relief, the joy, the pride. It was overwhelming. 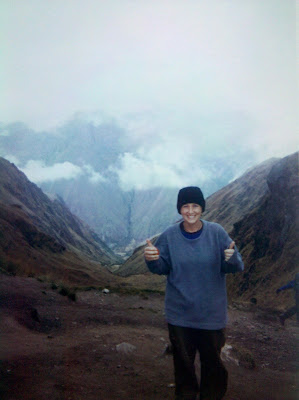 This could be my favorite picture of me ever. I keep this photo on my desk at home, which is why you're getting a sun-faded, crooked, photo of a photo kind of shot here.

And yes. This is the very first photo of me that has appeared on this here blog.
Posted by m at 8:58 AM

I LOVE this! What a wonderful favorite picture. I took the wussy train to Macchu Pichu- you earned it.

I love this post and that were getting to know you better.

Ps love seeing a pic of you after all these years.

Amazing story and photo. And it is so cool to revisit the shot.

You're right. This is the first picture of yourself that you have ever posted. You are beautiful!

Congrats on making it to the top :)

There is a hike here in colorado which is called "the incline". It's an old cog railroad line and it's a constant, very steep trail to the top of one of the smaller mountains of pike's peak. It's riduculously hard. The first time I did it I got spots in front of my eyes and was so dizzy. It was by far the hardest hike I've ever done. I did it a second time just to prove to myself me making it to the top wasn't just a fluke, but I'll never do it again.

And, I really hope I'm not saying something bad here, but all I could think of when I read your account of your climb - the pain, the exhaustion, wanting to give up but not being able to, and finally M cheering you on, supporting you and pulling you through. Well. It sounds exactly like labor to me. Exactly.

And I don't know you well enough to know if that is something you would like to hear, or if it is the last thing you would want to hear. Delete this if it's the latter.

this is simply awesome.

I also have buggered lungs from my ICU incident, and also only recently put 2 and 2 together on that one. I would go for walks with people and wonder how they were so fit, and I would have to to turn around...

Now I have an excuse and I'm sticking to it.

I love this photo and the story behind it.

Amazing photo and story. I'm so glad to see your face! I've been reading your blog for years (though I don't comment as often as I should) and it's nice to get to know another side of you. Thanks for sharing this with us.