I look at that lush carpet of young green shoots, of sprouting young leaves and I can't do it. I just cannot. 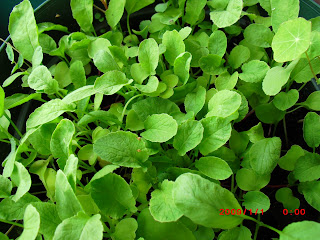 I understand that I am supposed to "be fastidious" about thinning the shoots, about pulling many out to give the remaining few a chance to thrive and grow. I know that too many shoots means not enough dirt and nutrients and good stuff for everyone. I get that.

But I wince every time I pull one out of the container. When I feel the tug of the root before it yields to my hand without much of a fight. I look at it and think, "but what if that was the one that would have been the best radish of them all? Now it doesn't have any chance at all. What have I done?"

I spend far too much time perseverating over which shoots stay and which have to be ok with the short time they've had in the sun. The amount of time I spend bending over the flower boxes on my tiny balcony is ridiculous.

Does anyone who does not live with infertility get this? Anyone?

It's Sunday afternoon and I am restless. I wore myself out yesterday but now I'm facing a bit of a lull. And lulls are dangerous. We had planned to kayak today but the clouds are unpredictable enough to give us some pause. I had wanted one last day on the river, one more push of the paddles before...

But instead I'll try to fill the day with more cooking, perhaps one more glass of wine, more last minute errands, more things that require heavy lifting because...

We are aiming for a transfer on Thursday.

There. I've said it. Progesterone and shots begin on Tuesday with my MIL getting the honor of the inaugural thrust since we'll be away together at a conference out of town. We are aiming for a transfer on Thursday, of one of the three last and final embryos we have on ice. Provided that one makes the thaw.

You would not believe the sleep I have lost this week. The initial report was that we had 2 frozen in one straw, one frozen solo. That had been the info we had been assuming for months. So, which to thaw? How many to thaw? If we only thaw Han Solo and he doesn't grow, we are out of luck, we'd have to stop the cycle, wait for a bleed, try again next month. If we thaw the duo, and only one thaws, choice is made. We use that and still have one remaining for a future attempt. If we thaw the duo and neither thaw, back to square one. If we thaw the duo and both make the thaw and seem to be growing equally well, we will need to choose, because a bare minimum of three separate doctors have recommended that we transfer only one embryo. Only one. Never mind that my lining is not the lush carpet of endometrium it once was. The "risk" of twins is something no one wants to face again. And that brings about a whole layer of sad I don't want to talk about right now, so I'll point you to what Bluebird says about that.

So which will it be? which if/then pairing do we opt for? Which roll of the dice makes the most sense?

Turns out my insomnia has been for naught. Nurse called on Friday to inform us that prior reports were wrong. We have three frozen in a bundle. Choice is made. We thaw three. We choose one. Hoping that one makes the thaw. If there are more, a choice must be made. I just hope we choose the right one.
Posted by m at 10:02 AM

What an extraordinarily gorgeous post. I have never gone through what you are going through right now, but the radishes, that is something I understand. How cruel these choices we have to make can be. All of my love and thoughts are with you this week. Always willing and able to listen. Always.

I'm thrilled that you've been given the go this month; as for the anxiety that goes along with it I wish I could help more than to say I'm here, reading. xo

I don't have any answers, but just sending you love and strength through this week.

This is so well said, m. I love the comparison between radish shoots and embryo selection. and maybe you're right, maybe only an infertility pt would think like that.

I'm so thrilled that you'll be having a transfer Thursday! That is really, REALLY exciting : ) I'm thrilled for you!

I have no answers for you but am wishing you that the decision is a straight-forward and easy one. A few thoughts, for whatever little they are worth: if more than one thaws, and after you select one (I'm assuming at day 3) and then one or both of the others makes it to blast, I have heard ot people refreezing at that stage. So, one possibility for plucking your radish and having it too. The other thought is one you've probably already had. I don't know where you two stand on selective reduction (geesh, don't know where I stand either, except to know that it's something I'd rather not ever have to face), but you could transfer more and then take that step, potentially, if you could stomach it. It would be super hard and you and M. have already had way more than your fair share of difficulty and grief, but it's a possibility.

I hope that it is crystal clear which one to transfer, and that the one sticks and lasts and becomes the living child you guys soo soo deserve. Finally.

That's great that you are moving ahead with the FET. And also good that you don't have a choice to make about how many to thaw.

I've always thought it was odd that clinics don't routinely freeze embryos individually (although my clinic told me that's what they do). That would seem like a better option for many people.

Anyway, I wish you the best of luck and will hope that your future baby makes him/herself apparent when the three are thawed.

I cannot imagine the choice you are facing, and I hope with everything I can that your choice is as simple as is possible under the circumstances and that you achieve a healthy, wriggly, beautiful baby in about 9 months from now!

I can't imagine the anxiety. What a bittersweet delicate decision. I've got my fingers and my toes crossed for you...

To this day, I can not thin anything in my garden. I let all the seedlings vie for survival on their own because I just can't make the decision.

Holding you in my thoughts as you embark on this cycle.

I am glad to hear that you have the green light for a transfer - and I totally understand what you mean about thinning out the garden.

Very nice post. I too hate pulling out those shoots. Many happy, positive thoughts coming your way for a flawless thaw and transfer!!

What a difficult choice. I am wishing you the best of luck with your transfer.

I have a hard time thinning my garden too. I also always wait too long to prune back my tomatoes to the ones already growing will ripen.

And if I can be so bold, but I have some strong feelings about the transfer.

Screw the advice! Transfer all three embryos and if by some miracle more than one sticks then do a selective reduction. I know that is not for everyone and I was sure I would never do it until I have too many freakin' failures and a dead baby. Embryos die all the time. Too many. Why not let ME choose for a change instead of nature.

Ok, so obviously (well, maybe you couldn't 'hear' me shouting), I have my own issues on the subject and I am very thankful I was never in a position to need to think about a selective reduction, but if they are going to die anyway, why not transfer them?

My thoughts are with you. I would dance naked around the clock tower in our downtown if I thought it would help.

Wish it didn't have to be so difficult, yet IF does that to us. Enjoy & do/eat whatever you like because hopefully Thursday will be a new beginning for you. Good luck!

Oh wow -- that's tough. But I'm happy for you that you're moving forward with a transfer (I'll be thinking of you all day Thursday).

I hope you get one perfect little radish for your transfer.

The radishes...I've done that. I'm glad you don't have to choose on the embryos - it's not a fair choice...not ever.

A transfer. I'm sending you all the goodness I know how.

Ah, yes. I also have a post drafted (but never posted) about trying to decide which treatment to pursue, knowing that we essentially *had* to prevent a multiple pregnancy. . . but yet being brokenhearted at the prospect of pursuing a treatment that would - well, that would absolutely preclude the possibility of another twin pregnancy. As much as I know it shouldn't happen - I'm not going to lie and say that . . . well, I don't know. Yes, one - one is better for all involved. *Sigh*

I'm so excited for you and your upcoming transfer. Everything - everything, my dear - is crossed for you.

I totally understand the radishes. I hope that things fall into place for you.

i too hope things fall into place for you. Thinking a lot about you.

I remember a conversation with my RE about the remaining embryos we had on ice. she assumed we'd continue to try FETs, but I was doubtful. I asked her, aren't those the bottom of the barrel? and she said you never know -- sometimes the most gorgeous perfectly formed embryos don't make it while the low grade ugly ones can thrive into healthy viable babies. so you just never know.